Do you ever feel like technology is controlling you? Time Traveller claims he has "seen" aliens enslave humans with technology in year 3000.

Disclaimer: The following evidence is real and alarming may not be suitable for the faint of heart, the following police report and images is evidence collected from classified goverment sources that were never meant to be seen by the public eye, this is a file leaked by Edward Snowden from the US Government. Viewer discretion is advised.

SECTION A: The Report

REPORT: ONLY FOR THE EYES OF NWO ONLY

Walks into a police station with denim jeans and white T-shirt, bald and no body hair. Claims he was a time-traveller from the year 3000. He claimed he had important information that could re-write the destiny and fate of earth. With him he had a portfolio of drawings. Police take him in for questioning. Written on the with sharpie portfolio reads:

"Technology has merged with humans as a symbiotic relatioship as part of an well-know rampart alien masterplan to domesticate the human race to enslave them as workers for their galatic conquer."

Here is a report written by a police man at the time. Turner has since been deemed mentally ill and stays at an asylum for the criminnaly insane. This report has been classified and was only able to be recovered when a scavenger discovered the report after the police station burned down in 2014.


Man claims he is a time-traveller. ✖ Says that he came through from an foreign alien-made wormhole device on an alien mothership. Says that this ship arrived from space in 2992. Says was only detectable from sateillites 2 days prior. Ship posed no threat.


The military tried to c o m m u n i c a t e and several attempts to fire missiles where made, which ✖ mysteriously ✖ all failed. Ship made strange vibrating hums several times a day. Says after a month after the arrival, technology started to act up all over the world. Ship never moves.


Turner proceeds to describe ✖ techology ✖ of this time. All his words are confusing seems to have a difficult time finding adjectives. Keeps on using "brand" names and terms that don't exist. Overall, seems that technology is part of the body and is key in communication, using the economy system, and using transit systems. Virtual reality is common past-time. Keeps on describing this "m a t r i x" system that people are constantly hooked up to.✖ Very confusing. ✖ Cars are still used, but operate above groud on "layers". Says over 500 body modications for purchase and many more private ones.


Turner decided to take all his mods out and detach himself from all technology out of paranoia which he claims saved his life. Says that on the Eve of 3000 exactly at 12:00 the ship started a global event.Everyone who had any piece of technology hooked to them were suddenly "brainwashed" that began an all out war between technology merged humans versus regular humans that resulted in the enslavement of humans by an alien race. The event was called the Y3K hier by survivors after Y2K scare in the year 2000. Says he boarded mothership 7 months after Y3K. We recorded this story from subject:

"Only a few of us didn't get affected by the brainwashing. It was insanity, the cheers of the new years was quickly met by a screaming robotic sound that came from the mothership, the sky lit up with a floursecent blue and all lights and technology went out for about 10 seconds." I was in the city watching the clock with tens of thousands of others. I saw flickering blue ࢟ lights on peoples ✖ technology. ✖ It all happened so fast. Suddenly all these people were "possessed" and immediately starting to kill anyone who wasn't possessed. It was a slaughter that went on for months. People who had removed their technology went into hiding and this war broke out from the possessed and the regular.

The possessed built these fortresses and aliens starting to come down in fleeter ships to these bases. The only way I managed to escape from hiding was when a team and I managed to break into a base and board a fleeter ship to get onboard the mother ship. We managed to build fake technology and appear "possessed" to get in. There was a screening onboard the ship. I decided to make a decision to run through and bolt through the mothership.

Alarms were blarring. I went into a room where this machine stood where the year and location could be inputted on a computer log. Turns out it was working time-machine, I managed to use it to come to this year and used the XYZ coordinates to my house, which I guess somewhere in the forest out in Colorado Springs. I was warped into the forest here, nothing came through the ✖ wormhole ✖ except me, even my hair my clothes were gone. I am not sure if I can make a difference any of this fate as I have no idea how time travelling works but you must believe this story. Technology is an evil otherwordly influence that must be stopped if we don't want the same fate to happen to us. I have no idea what happened after I left, I can only imagine only the possessed would have survived and now live as enslaved shells to serve the aliens. It was like a plantary invasion, done entirely with braiwashing technology."

Turner now attempts to describe what we went through by pulling out a portfolio of images and explaining each one. Located in this file are those images and the attached depiction according to Turner. This report is to sent to the NWO for further inquiry. Turner has since been jailed and silenced until further notice until the NWO contact back on what to do next. 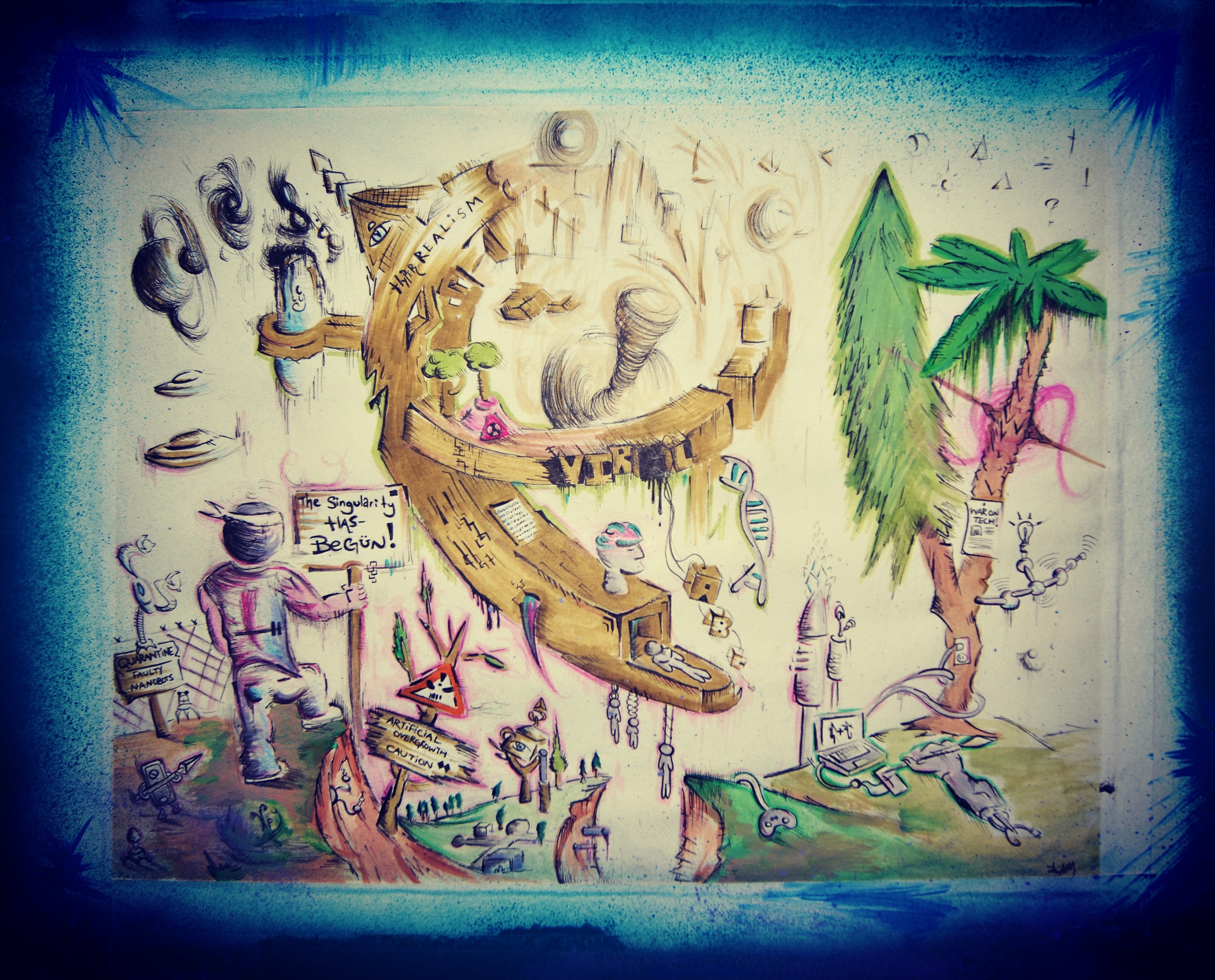 ✅ Turner: Okay I drew these pictures here, in 2004, after the wormhole incident. This first one, is of the arrival of the mothership and the glitches in technology. I don't know why but my memory is fading quick, I had to draw these to remember myself, so they're interpretative. It's like I keep forgetting I'm from 3000. I just began blacking out memories and believing I just am here.
☕ Police: What do you mean blacking out ☣ memories. ☣ That you're just here? How? Do you not remember your past. How do I know you're not just having pyschotic episodes and making this up.
✅ Turner:I don't know, what proof would I have, maybe someone knows of this, I just want answers, it's like when you wake up and try to remember your dreams and it's difficult. I think it's an affect of the wormhole and the time ☣ distortion. ☣ I know I'm not crazy, but I feel myself forgetting.
☕ Police: Okay well this is all very hard to believe but, try to explain this image.
✅ Turner: Well that's me, looking at the mothership, it's like this arc thing, and everything is distorted at the top, like it looks surreal, things merged into nothing. I tried to draw technology of 3000 here, signs I saw, things I did there. It's all pretty similiar to what we have now, phones, computers, robots, just merged into us more, and more advanced.
☕ Police: What's this tree?
✅ Turner: Well most of the trees are man-made, they give off ☣ oxygen ☣ but are created using computers, that build molecules in software.
☕ Police: What's the Singularity has begun sign mean.
Turner: Well, I was protesting after 2992, trying to advocate to quit technology.

Turner: Well turns out I'm not, Technology did cause our demise.
☕ Police: That's up for ☣ debate ☣ still. Anything else you care to explain. This is for an official report.
✅ Turner: The eyes. They were part of the glitches, people kept on feeling they were being stalked, watched. People felt technology was betraying us, people starting killing themselves, the government ☣ banned ☣ certain technology. But our intution wasn't enough. The mothership was too ☣ smart ☣ and not enough people listened to the warning signs.
☕ Police: Warning of what.
✅ Turner: That the mothership was controlling our tech, brainwashing us or something. No one believed it till it happened though, just a bunch of conspiracies and notions.
☕ Police: Yea like your conspiracy now, time-travelling, aliens, you do know this is insane.
✅ Turner: I see that now, 1000 years backwards, I don't know what I was thinking, or how this would pan out, but I had to do something. 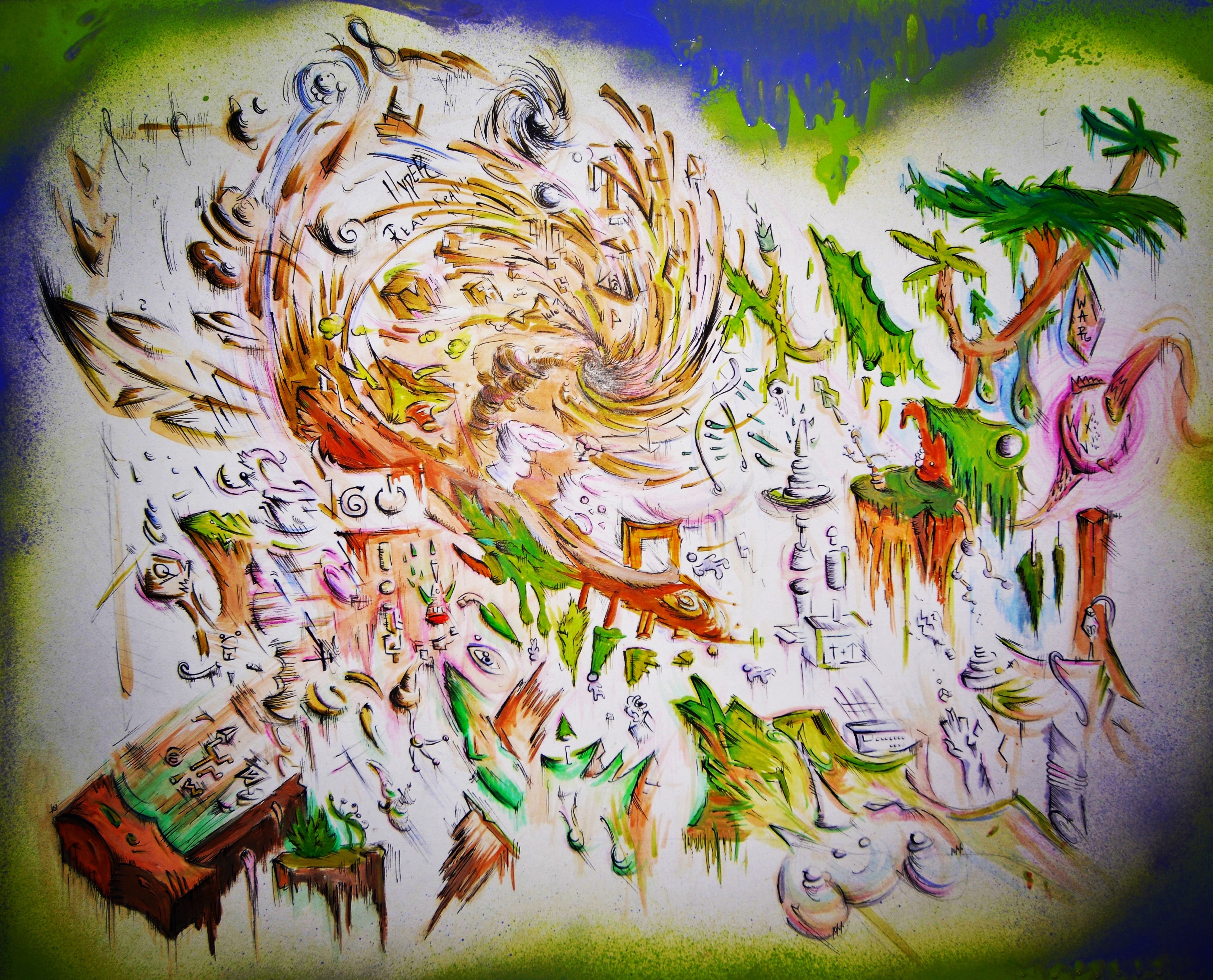 ✅ Turner: These 2 Images. This is what it was like going to the wormhole ❗ machine.❗ As soon as I turned on the machine, the world distorted to this infinite point. I saw the entire planet, swallow up into this single point, then I saw time, as some tesseract ❗ I just flew into oblivion, into the tesseract. Everything I ever saw and knew about, warping around me as I kept acclerating. I saw the beggining and end of the universe, dilating and waving. It was like a DMT trip but but I was physically there.
☕ Police: DMT is an ❗ illegal ❗ schedule 1 drug, don't be naive bringing that up. But aside from that, I see your point. I still don't find this story convincing, or how this is relevant or why you would come to us about this.